When someone hears the words “super long layover,” they often immediately groan. But when you have a 22 hour layover in Honolulu, on your way to New Zealand, with two of your best friends, you find a way to cram in as much Hawaiian awesomeness during that long layover that you can.

I’m Taylor. Casie was my first friend at UW-Eau Claire. We navigated both college and that weird post-college, semi-adult time in our lives together, have traveled together, and I’ve found that my life is always better with a little bit of Casie by my side. So when she asked me to write for this blog, the answer was, “Duh, of course.” I recently spent 10 days traveling with our buddies Michelle and McKenzy, and you’ll hear from them too, but I’m here to talk about how we did Honolulu in 22 hours.

When Michelle booked our flights to Auckland, New Zealand, she threw in that we have a “super long layover” in Honolulu. We looked at the flight times and realized the length of the layover meant that we could spend some time exploring the island of Oahu. I had visited the Kona area on the Big Island of Hawaii last year and loved it, so I was excited to check another Hawaiian Island off my list. But with such a short trip, we had to prioritize. Here’s everything we planned to do in the 22 hours:

We flew from Minneapolis to LAX, LAX to Kona, Hawaii (the Big Island) and then a quick flight to Honolulu for the night. (We flew Delta and Hawaiian Airlines, which I know is important to Casie’s blogs. We enjoyed Delta, and weren’t super impressed with Hawaiian after our flight to Kona, but then we flew with them again to Auckland and they really impressed us. Anyways..) During our flight to Kona, we heard the flight attendants talk about flights to Honolulu leaving about every 45 minutes. Our layover in Kona, while beautiful (the airport there is basically outside) was supposed to be 3 hours. We knew our time in Hawaii was limited, so once we landed we asked if we could move to an earlier flight. For $30 each we were on a flight, seated in an exit row, that landed in Honolulu an hour earlier than our original flight was supposed to take off. Score.

Honolulu is basically a military base, big city, and beach town all in one. We had booked an Airbnb in Waikiki, which is pretty much where the action is. We grabbed an Uber from the airport and drove through the city with Paul, our favorite Uber driver of the whole trip. He is a Waikiki native and told us all about the city and what we should hit up in our limited time. He showed us the crazy expensive shops on Kalakaua Avenue (√) and where the beach was in relation to our room. He gave us such great advice, including our amazing dinner, which you’ll hear about in just a minute.

After checking into our Airbnb, we grabbed our swimsuits and made our way immediately to Waikiki Beach (√). We swam while the sun set, and didn’t want to get out of the water, but knew we had to move on if we were going to accomplish everything on our list.

We quickly changed for dinner at the Sidestreet Inn, a recommendation from Paul. When our Uber pulled up, we realized it really was a “side street,” as the main door was in an alley. However, this place had the best fried chicken we’ve all ever had. We continuously talked about it the rest of the trip.  It was seriously a highlight. While our dinner didn’t have sunset view, we were sure glad we chose this restaurant. Seriously, garlicky, nutty, juicy fried chicken. So. Good. We told the bartender about our limited time on the island, and he recommended our next stop: Maui Brewing Company (√) 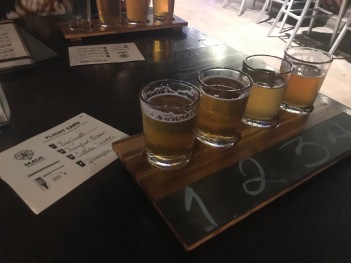 We headed to Kalakaua Avenue and walked by the Tesla dealership and Kate Spade store to get to the brewery. We had big dreams of staying up all night to take in the city, but after we ordered our beer (and a Mai Tai for Michelle) we realized how exhausted we were from our travel day, and finished quickly, even though the drinks were delicious. We stopped for souvenirs on our walk home, and then hit the hay. We had an early and exciting morning ahead of us.

We woke up early for a sunrise swim in the ocean before heading to Diamond Head (√). This was a “must-do” from my dad, who had visited in 1989. We weren’t disappointed. While the hike was a touch rigorous, the views couldn’t be beat. 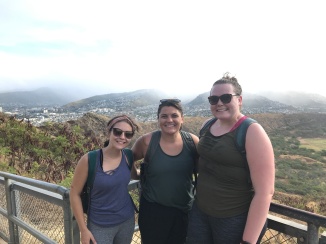 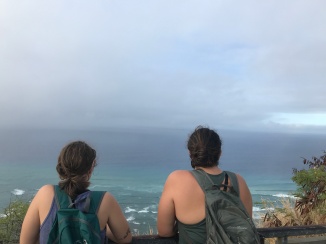 We only had a few hours left before our flight, and we knew we needed to eat some lunch, and we knew what was down by the beach, which was a lot of sit down restaurants, and a McDonald’s. The view of Waikiki was great (√), so we grabbed some early lunch at McD’s before we had to head to the airport.

After packing up our Airbnb, we left right away for the airport and were on our way to New Zealand. We really crammed in as much as we could in Hawaii, and we all thought we did pretty well. Looking at our original list, the only thing we didn’t technically get to cross off was the sunset view at dinner, and honestly, that chicken at Sidestreet made us forget all about that. We all would definitely visit Hawaii again, but think we pretty much did Honolulu, and don’t need to go back there, unless it was a day trip from another island to tour Pearl Harbor.

Michelle and McKenzy will fill you in on the other portions of our trip, and I hope Casie likes this enough to ask me to write again! TTFN – Ta Ta For Now!