You all are old pros at this point, but in case you’re just joining in on my posts about my trip to both Iceland and Scotland, I’m Casie’s older sister, Molly. This week, I’m telling you all all about my culinary adventures in Iceland!

Last week, I told you all about the sights during my two days in Iceland, but I neglected to mention the food because I wanted to give you guys a FULL DEBRIEF, so here we go.

Day 1, Meal 1- Cod and Beef Tenderloin at LAVA Restaurant at the Blue Lagoon

Our first meal in Iceland coincided with our first stop on the trip, the LAVA Restaurant at Blue Lagoon. After acquiring a mild case of heat exhaustion, we were ready for food. One thing I learned very quickly from the Icelandic restaurant scene is that fish is HUGE. While I was down to eat all of the delicacies of the sea, forever boo was not, so you, dear reader, will get a full-ish rundown of the surf and turf of Iceland.

LAVA offered a number of both land and sea options, but the Cod really stuck out to me. The second it was wheeled out with a mountain of dill atop it’s golden brown exterior, I knew I had chosen correctly. It was truly an amazing fillet o’cod, and you should try it if given the opportunity.

Forever boo (shockingly revealed as Tim in my last post about Scotland) ordered the beef tenderloin, sautéed mushrooms, fries, and aioli (look how beautiful it is!). I have to say, I was envious of his french fries and aioli. In fact, I probably ate most of them, but in terms of the whole meal, forever boo recounts it was “possibly one of the richest meals I’ve ever eaten. Give yourself some time between the spa and eating. It’s the kind of meal you want to sit and focus on.” 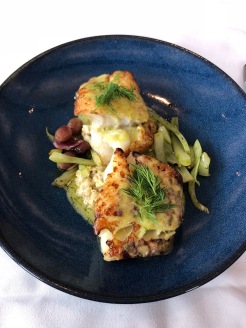 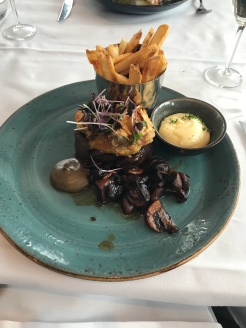 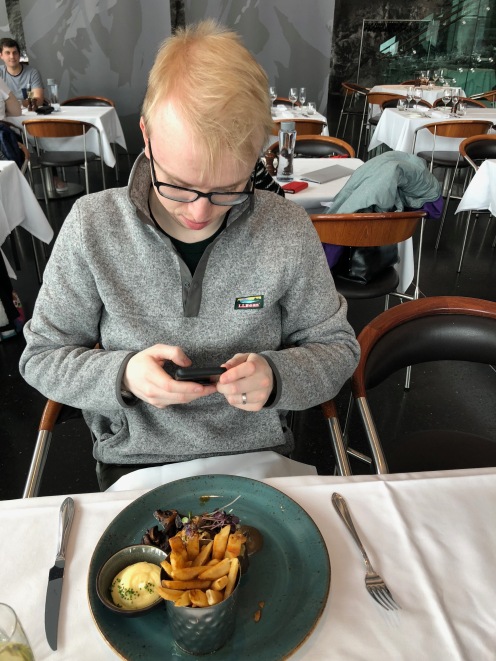 Overall, I would highly recommend going to LAVA after your luxurious soak in the lagoon, but keep in mind that you probably will be exhausted during your meal.

Despite having a full meal only like an hour or two earlier, I had to know what the deal was with Icelandic hot dogs (traditionally topped with “ketchup, sweet mustard, fried onion, raw onion and remolaði, a mayonnaise-based sauce with sweet relish” according to the Bæjarins Beztu Pylsur website). Once we arrived at our Airbnb in Reykjavik, we set off for the world-famous Reykjavik hot dog joint, Bæjarins Beztu Pylsur.  While the stall can get a little busy, our choice to stop by on an off-time was a solid one. We walked right up, ordered two hot dogs with everything on them, and enjoyed. The classic Icelandic toppings come together in such a great way and provide a variety of tastes and textures that I can genuinely say I’ve not had on a hot dog anywhere else. 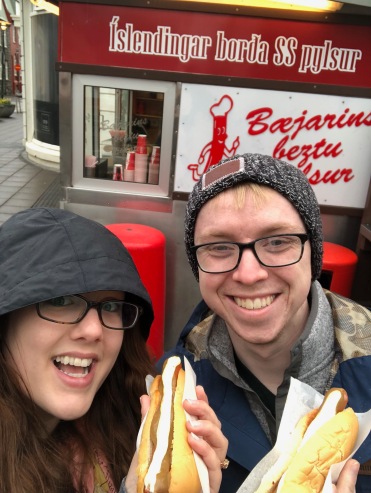 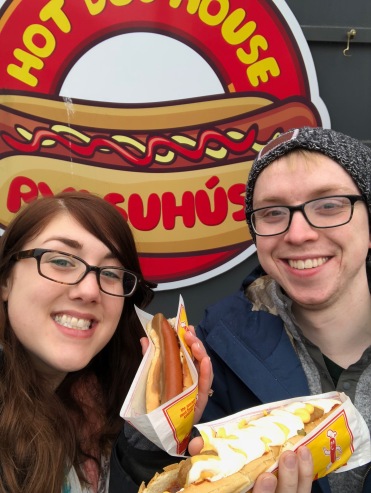 After scarfing down the hot dogs from Bæjarins Beztu Pylsur, we decided it would only be fair to try their rival Pylsuhúsið (which is only a short walk away from Bæjarins Beztu). I ordered another classic (*for science!*) while forever boo went for the monstrous chili dog, which came with chili and a spicy mayo sauce. It was good. They definitely had more selection, but in terms of a classic Icelandic hot dog, I’m going to have to say that Bæjarins Beztu won it for me. However, (*a twist!*) forever boo actually preferred his chili dog at Pylsuhúsið, so there is no clear winner.

You’d think that after eating a full meal at LAVA Restaurant and then devouring two hot dogs each, we’d be done. But oh no, we wanted to experience more noms, so we stopped at a small convenience store in Reykjavik and grabbed at random some Icelandic snacks (CAVEAT: Not all of the snacks were made in Iceland). 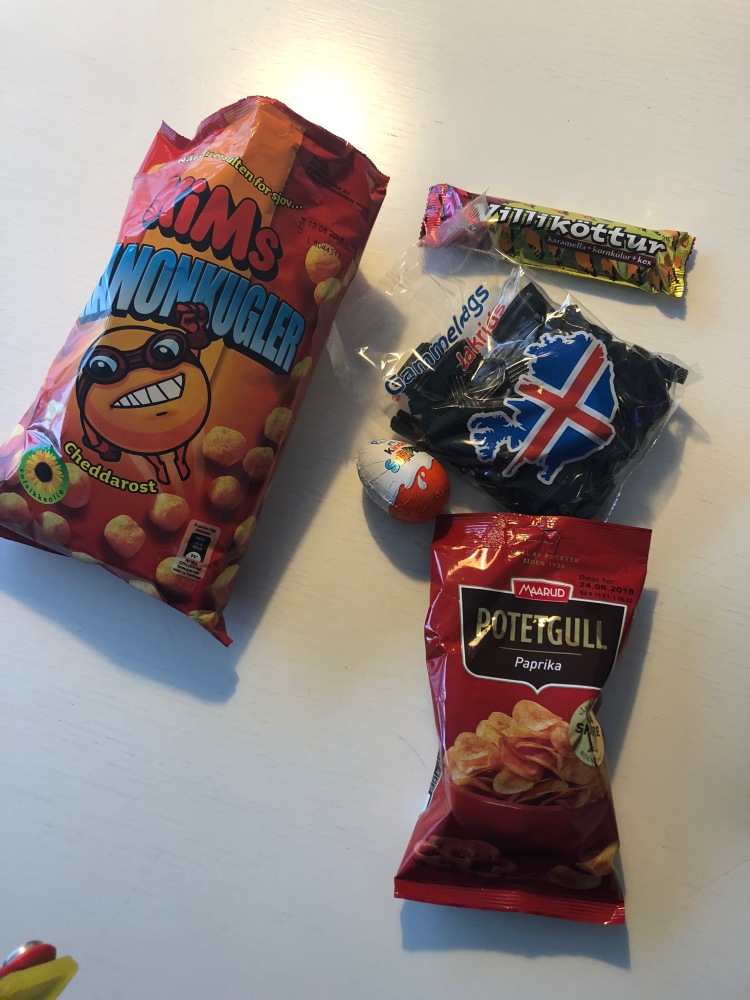 We got a bag of KiMs Kanonkugler cheese balls, paprika-flavored potato chips, black licorice, a kinder egg, a can of Applesin, and a caramel and puffed rice chocolate candy bar. Overall, the winner for both us were the cheese balls. Again, they weren’t teeeechnically Icelandic (they’re Danish), but man, they were good. A close second for me would be the amazing and actually Icelandic, black licorice. However, Pro tip, guys: don’t overdo it on the black licorice. They LOVE it in Iceland, and it’s in everything, but I ate way too much of it and felt pretty sick for like two days afterward, so watch out!

What you might be wondering is, what about Skyr? It’s the yogurt of Iceland! Well, we got some and forgot it was in the fridge and never ate it, so I’m sorry. I have failed you all.

As you might recall from my previous Iceland post, Day 2 was our trek around the Golden Circle. Before we set off, we stopped at Sandholt, a bakery/café near our Airbnb, and grabbed some sustenance for the road. 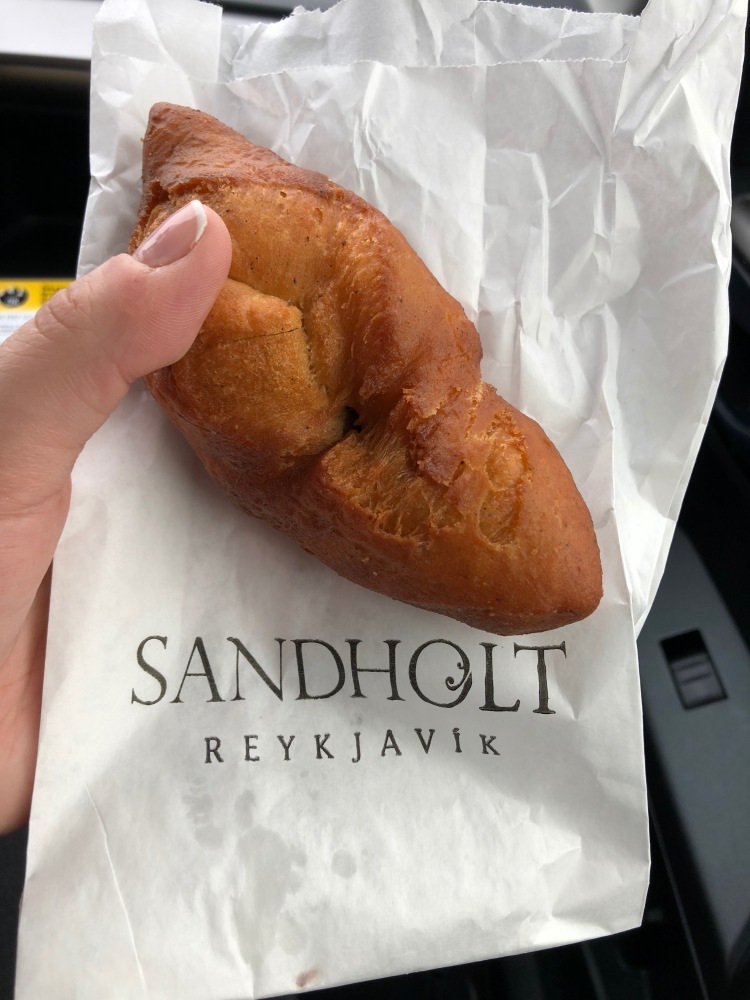 A delicious Icelandic donut, or kleinur.

Along with some classic pastries, we also grabbed an Icelandic donut, or kleinur, and a sandwich with lox, pickled red onions, cream cheese, arugula, and various herbs on a pretzel-like bun. All of it was great, and provided the perfect amount of food for our mini roadtrip.

A note about the Icelandic donut: It similar in density to a cake donut, but the batter is a little *spiced*, which is great. Definitely try one!

Upon returning from our Golden Circle tour, we went to find dinner in Reykjavik. We had noticed Kol during our stroll around town the day before, so we decided to give them a try. It has a somewhat pub-y vibe (at least where we were sitting), but I suspect the rest of the restaurant is more classic dining. We partook in some libations, so I chose Gull beer, and as forever boo said, “It kind of tastes like Grain Belt Nordeast” (which is a Minnesota beer that he loves, so high praise from a non-beer drinker). 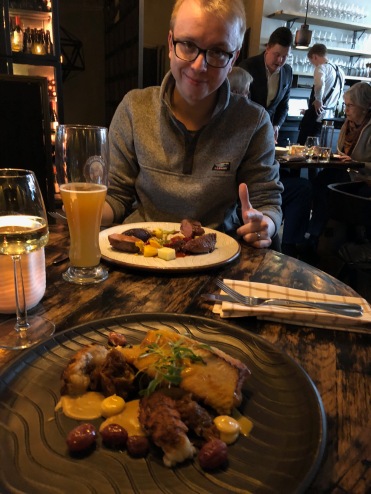 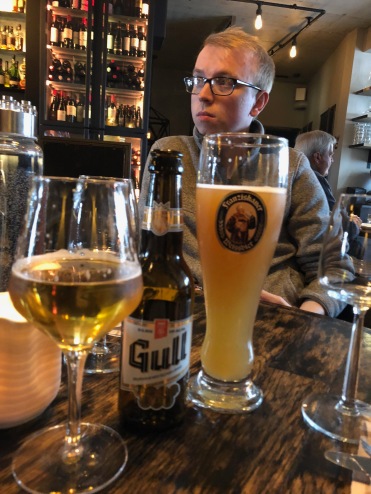 The time came to order food, and I wanted to be adventurous, so I ordered perch with langoustines (both of which I had never had, and they were great!). Since forever boo didn’t want fish, he, again, ordered beef tenderloin, and though he had eaten it the day before, he was impressed. Overall, the menu was very similar to the LAVA restaurant at Blue Lagoon, which may have been a coincidence, but perhaps it could also hint at a trend in Icelandic cuisine: Fish, lamb, beef, and a vegetarian option. It’s all you could  ask for, really, and it was done so incredibly well at both restaurants.

Our final gastronomical stop was Reykjavik Chips, which had also grabbed my attention on our walk around Reykjavik the day before. You walk in, pick a size, add a beverage (if you want), and choose sauces for dunking. It’s a simple system. 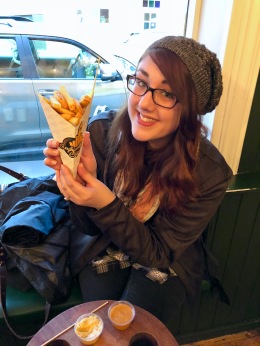 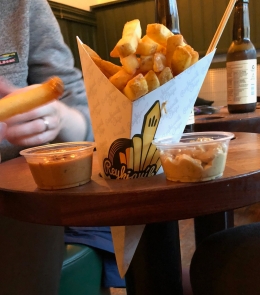 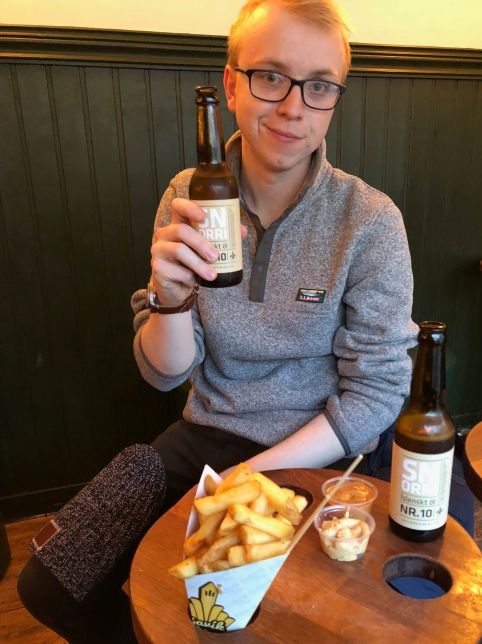 We chose a medium-sized fry (we had just eaten dinner, I guess), two Snorri Nr.10 beers (y’all, this beer was infused with *thyme*, and I loved it a lot), and some of the Hannibal pickle sauce and the Satay Vegan sauce. It was truly incredible. They also had tables with holes to act as fry-holders, so I can see this place being a great little hangout on the weekends. Overall, it was a great way to end our culinary adventures in Iceland.

You guys, I don’t think I could pick a favorite meal in Iceland because it was all so good. My advice is eat some seafood if you’re up for it, try all the hot dogs, and wander into whatever restaurant you want (at least in Reykjavik) because you’ll undoubtedly find delicious food.

Well there you all go! The sights and now the noms. I hope you all enjoyed my recounting of my trip to Iceland!

Next Tuesday, I’ll wrap up with my *final* (I know, I feel like we just started, right?) post about the second leg of my trip to Scotland. See you then! ❤