As you might recall, I am not Casie. I’m her sister, Molly, who recently went on a trip to Iceland and Scotland. I’m super excited to tell you all about it. This Tuesday and next, I’m recounting my return to Scotland. It is basically the greatest place in the world, and I will fight anyone who tries to convince me otherwise.

I often have a hard time conveying how completely in love I am with Scotland. My first visit was in 2011 during a whimsical study abroad with the Wisconsin in Scotland program, and how could I not? I traveled around the country, met some puffins and Shetland ponies, learned about Scotland in the modern world along with Scottish ghost stories, saw where some of my ancestors supposedly came from, and ate shredded cheese on sandwiches (lulz, yeah, I don’t know, the Scots and maybe even UK’ers as a whole are weird) with exotically flavored *crisps*. It was magical. After crying the entire way to the airport for my flight home, I promised myself one thing: I’d be back.

My initial thoughts were that I’d come back for school. But as so many of you study abroad alumni know, going to back to your adopted home-away-from-home isn’t always as easy as it was to get there the first time. Life often gets in the way of travel. My career goals evolved, my schooling options narrowed, and I was stuck in the US for the foreseeable future. So Scotland, sadly, had to wait (To this day, I do check for museum jobs in Edinburgh weekly, so maybe someday I’ll be back for good). 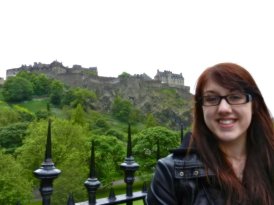 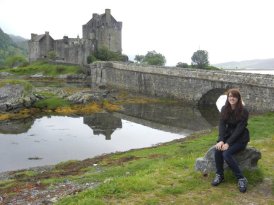 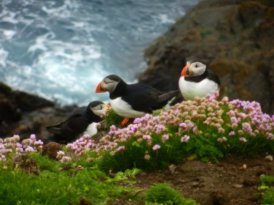 Summer 2011 Wisconsin in Scotland study abroad trip. But like actually, if you’re on the fence about doing this program DO IT. It will change your life. P.S. Sorry for the terrible photo quality, camera’s weren’t what they are now, apparently.

When my forever boo and I were thinking of honeymoon destinations, I immediately thought of ways to entice him to go to Scotland. As much as I loved Iceland, it was all a ruse to go to Scotland. It didn’t take much to convince him. Since Wow Air had such a convenient connection from Keflavik to Edinburgh, there was no reason not to visit. We also found an absolutely amazing Airbnb, so it was set. I’d finally get to go back! Unlike our Iceland trip, though, this trip would be an act of balancing sites and activities that I had already done with ones I had not.

We arrived in Edinburgh Airport mid-morning and took the Airlink 100 bus into city. While I had remembered from 2011 that this bus route was super convenient (like seriously, it’s so easy!), I had totally forgotten how sloping the walk would be from Waverly train station, where the bus dropped us off, to Grassmarket where our Airbnb was located. Needless to say, my forever boo got a week’s worth of both strength and cardio from the trek. We decided that on the way home, we’d splurge on an Uber.

We settled into the Airbnb (meaning we napped), and it quickly became time for our first activity!

I took my first Sandeman’s New Europe Free Walking Tours during my initial trip to Scotland in 2011. I love them so much that I try to find them whenever I’m traveling in Europe. So far I’ve been on the Edinburgh, Dublin, Paris, and Amsterdam tours, and they are all great. The model is basically that you reserve a ticket online for free and then tip the tour guide however much you’d like at the end of the tour. They also have some special tours that you do pay for, like a Harry Potter Tour of Edinburgh that I’ll highlight next Tuesday.

During the Sandeman’s New Europe walking tour of Edinburgh  with Edinburgh Castle in the background. *Notice the raindrops on our glasses. It’s Scotland, y’all, it rains a lot. Hence our need of waterproof shoes.*

The free tour is of Edinburgh’s Old Town, filled with charming old stone buildings, windy cobbled streets, and centuries of history and culture. We also stopped at the lovely Grassmarket Café , which has great carrot cake and does some awesome work with the Grassmarket Community Project.

A) you get a sense of the geography: the city can be a little confusing for first-timers and being able to get your bearings while also learning about why the town was once called Auld Reekie, for example, is always a plus;

and B) I really think it endears you to the city right away. As I mentioned previously in my post about Iceland, we struggled to really get a sense of Reykjavik because we missed out on an enthusiastic tour guide telling us all about the sights, food, and history.

So our first day wasn’t terribly jam-packed with stuff to do, mostly because our travel fatigue was strong, so we decided to grab dinner and plan for bed. We went for  traditional pub fare at The Last Drop in Grassmarket (you’ll notice the theme of our food choices was that we were lazy and chose places near our Airbnb). I FINALLY had haggis again, and for those of you who won’t try it BOOOOOO! Get out of here! It’s delicious and you should eat it!

Forever boo with some pub-ly brews and HAGGIS!

Overall, though crowded, the pub was good. So good, that it put us straight to sleep once we got back to our Airbnb (minus forever boo taking serious interest in the UK’s revival of Who Wants to be a Millionaire?).

Our first stop the next day was Edinburgh Castle. Perched atop the volcanically formed Castle Rock, the castle is the most popular destination for visitors to Edinburgh. We booked our tickets ahead of time for the 9am slot, and once we entered the castle, we immediately found a free tour (what luck!). 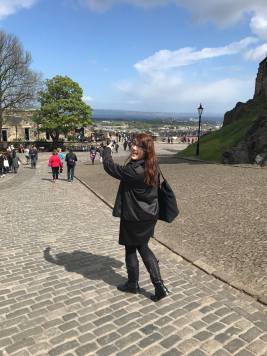 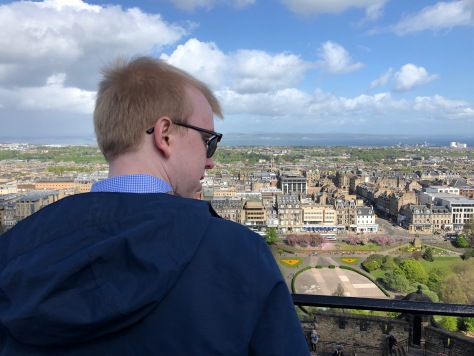 The Castle does have a great view, though!

Now guys, I’m usually all about going to historic sites, learning about history, and being a nerd in general, but I’m often bored at castles. There’s just something about them… Maybe it’s the inherent inequity of the societies that built the castles? Or maybe it’s that my actual interest in history is millennia before castles (so like, archaeology)? I don’t know. But don’t get me wrong, I’ll go and be like “oh, cool, a cannon/tapestry/hole in the ground meant to be a toilet,” but as a second-timer to Edinburgh, I totally would have skipped it had it not been my forever boo’s first time. I would never say that you shouldn’t go because you’ll learn a lot about the history of Edinburgh and especially the *monarchy* (sorry, I can’t help eye rolling), but I’m just saying it’s not really worth a second visit.

Day 2, Activity 2- High Tea at the Colonnades at Signet Library

After a very positive high tea experience back in 2011, I decided that the forever boo needed to do tea. We decided to visit Colonnades at the Signet Library, and it did not disappoint. 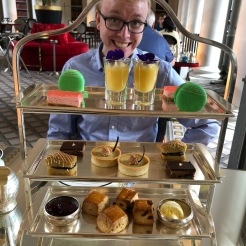 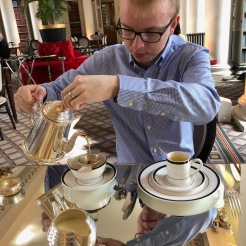 With four courses of soup, savories, sweets, and sorbet and a selection of teas and gins to die for, Colonnades simultaneously intimidated us because it was so nice that we felt like plebs out of our element, yet it was also super warm and welcoming (which can be difficult in a library setting). By the end of our tea, we both hoped to visit them again on any future visit to Edinburgh. 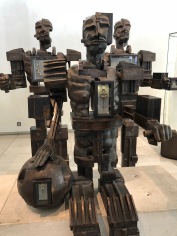 We wandered around the museum, stopping in their History and Archaeology Galleries (my favorite is Early People) filled with archaeological artifacts like this that made me so incredibly excited to be back. They have a gallery for any interest, though, so if archaeology bores you, then you’re in luck (but also, if you don’t like archaeology, you can leave because archaeology is the best). There’s also art, history, technology, biology, geology, etc.!

I might be remembering incorrectly, but I believe they’ve updated a number of their galleries since the last time I visited, and I really enjoyed the interpretive panels (as you read last time, I love me some good interpretive panels) and interactive activities (their newish tech hall is great, forever boo loved it).  Gah, I just love the National Museum of Scotland so much. I could go on forever, but I’ll spare you.

We concluded our second day in Edinburgh with take away from Castle Rock Take Away off of Grassmarket. My fish and chips and Tim’s (oh, whoops, I said his name, well the cats out of the bag, forever boo) mince pie and curry chips were two grease-balls of deliciousness. Add in the Scottish delicacy that is Irn-Bru, and you’re on your way to feeling super Scottish. I can’t recommend highly enough that anyone visiting Edinburgh visit a chip shop (or Chippy as they are lovingly  called). 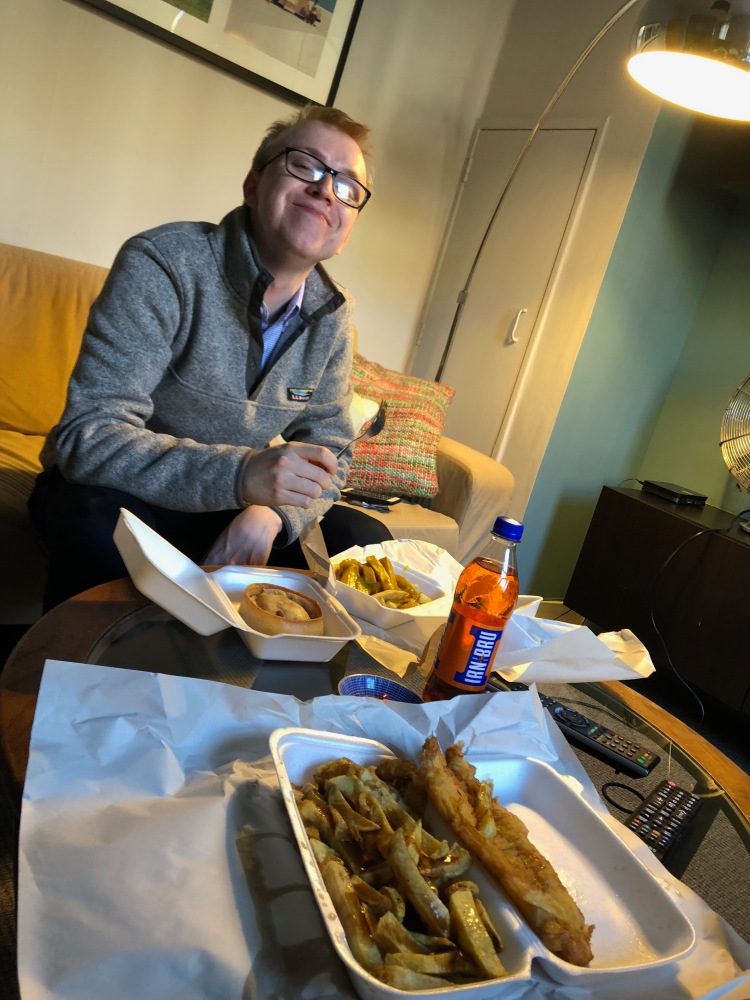 ❤ Take away dreams ❤ Pro tip: Get brown sauce on your chips. You won’t regret it.

After, once again, eating too much heavy food. We watched more Who Wants to be a Millionaire? and feel asleep. Our tour of the Scottish Highlands awaited us on Day 3! Until next time…

Next Tuesday, I’ll tell of our whirlwind tour of the Scottish Highlands and my return to Dalkeith, Scotland, where I studied waaaaaay back in 2011. This Thursday, I’ll recount my culinary escapades during our two days in Iceland!

One thought on “Return to Scotland: The Coos, Brews, and Waterproof Shoes, Part 1”

Quarantine with the new G & OG.
My coworker doesn’t quite understand personal space & work day norms. But he’s playful & cute, so I don’t mind.
lil man
I gave up cheese for the month of February because it’s a short month & I need to test my willpower annually. Here’s me reunited with my favorite food on March 1.
Sometimes you just need a weekend in Duluth.
24 hours in Denver with this forever friend, Galentine, & this years valentine 💕💕