London is easily one of the greatest cities in the world. I’m normally not a big city type of person, but there was something special about London that made me feel at home. We travelled from Liverpool to London on Monday and basically took that day to settle into our “Hotel” ( it wasn’t technically a hostel, because we couldn’t personally use the kitchen or anything like that ) and find dinner somewhere. As we walked around our “hood” to find food, we all got this unsettling feeling of being in the ghetto, feeling somewhat unsafe. However, as the week went on, we all got use to the area ( kind of ). The first night we found dinner at a little Italian place ( I got Bruschetta…which was insanely disappointing ).

The first day we went to the Tower of London. It’s a place where royals use to roam and live and even fight. It holds the Crown Jewels and many other amazing artifacts. It was a beautiful day to walk around the area and see what all it holds and then soak it all in while laying in a grassed over moat. Amy and I got separated from the group so we ended up going through some little shops and grabbing lunch at an almost gas station like place, however, the food was very decent. The Tower of London is also right beside Tower Bridge, easily one of the most beautiful bridges I have ever seen. Many people talk about London bridge, but I never actually saw that one. 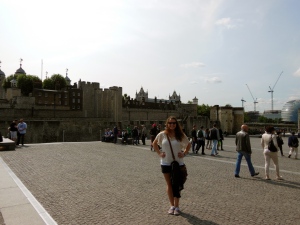 After the Tower of London, we had free time the rest of the afternoon ( Except we had a meeting at 5:30 ) so we went to explore the city. We all decided we really wanted to go to Parliament and Big Ben, so we hopped on the Underground ( only the BEST way to get around London ) and headed off to the Westminster station. As we excited the station, everyone was in shock. Parliament was right in front of us and everyone couldn’t contain their excitement. I keep looking around and finally look to everyone and say, “Uhh, where’s Big Ben? It’s no where….” and everyone looks at me kind of stupidly and points their fingers towards the sky. I crane my neck up and finally see the one thing I wanted to see the whole time, the Biggest Ben I’ve ever seen.

The next day we went to Hampton Court. A palace that the royal family owns and opened to the public in the 1800’s. Everything about the palace is extravagant. Each room was something special, there was a room with a ton of mattresses in it and had a video playing on the ceiling. ( We watched the video almost 5+ times because it was so comfortable ). However, the most incredible part of the palace were the gardens. They had rose gardens, great vine “garden”, and many other gardens with amazing designs. One of the gardens even had a maze!

After Hampton Court Palace, our one professor informed us that she was going to go to Evensong at St. Paul’s Cathedral and invited any of us who wanted to join, well to join. Myself and about six others decided it would be an amazing experience to go sit in at a Cathedral that is so famous. When we arrived we had a bit of waiting time so we roamed the area, then once we got in we were sitting in the normal seating, however, they invited whoever wanted too ( until the seats filled up ) to sit in the area that really important people use to sit, right beside the choir. Obviously we took that opportunity. I sat in the seat of Sir Chiswick.

The next day we went to the British Museum and Covent Garden. The British Museum was huge and overwhelming. We walked through a few exhibits, then spent a lot of time in the AMAZING gift shop. I would suggest this Museum to any that are traveling that way, because it honestly holds the history of everything British. After the museum, myself, Emily, and Amy waited in a park across the street, while everyone else continued to look at the eight million artifacts. For lunch we headed over to the Big Ben area to find some Fish & Chips, but we honestly couldn’t find one that seemed to be just right. So we settled for some burrito bowls, then proceeded to meet a good amount of the group to buy tickets to ride the London Eye. Then it was off to Covent Garden.

Remember the scavenger hunt we had ( or one group had ) in Liverpool? Well we got to have another one at Covent Garden ( which is indeed a market square, not a garden ) and this time my team was out to win. Emily, Jessica and I received the clues and were off. Before even reading a question we just started sprinting. We knew that if we just asked people, we would eventually find everything on our question list. WIthin the first 5 minutes, Emily and I had found a guy that was willing to run and help and we had lost Jessica. We first found the Seven Dials. It’s basically a round about and sun dials all in one. This guy continued to try to help us, but all in all, he was just holding us back. ( It’s amazing how many locals don’t know about their surroundings and history ). After and hour and forty-five minutes of sprinting around Covent Garden, my team FINALLY had a victory and received the five extra credit points.

That Friday was our first free day in London. We decided to do some shopping because it was rainy and cloudy. We were going sightseeing on our other free day and wanted to make sure the weather would be better for whatever pictures we wanted to take. So for shopping we went to a place called Camden Street. It was basically a market with discounted merchandise that is really popular all around London ( aka FAKE ) but who needs real when you’re a poor college student? We walked around there, found some fun stuff, found a market that was specifically craft or homemade goods, then grabbed some Bang Bang chicken for lunch. Then some of us went back over to Covent Garden because myself and a few others never actually got to see the shops within the market cause we were running around the whole time. After shopping around there, we went back to the Hotel and got ready to go on the London Eye.

Although it was somewhat cloudy and rainy, the London Eye was exactly what I hoped it would be. It was so nice to finally see the city of London at night in all it’s majesty. Our capsule in the Eye was completely full, which was weird cause other capsules weren’t as full as ours, but everyone was so kind and funny. 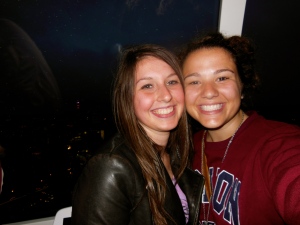 The final free day in London we went to Primark in the morning ( only the greatest store in the U.K. ) then met up with the rest of the group at Buckingham Palace. There were huge groups surrounding the palace, so I finally asked a man what was going on and why people were standing around just waiting. I was informed it was almost time for the changing of the guards. I was somewhat disappointed when hearing that. However, I’ve never been as into the Royal Family as others. After seeing the changing of the guards and all that entails Buckingham Palace, we moved on to other sight seeing areas we all wanted to see. I wanted to go back to Tower Bridge to do some pictures that are still a secret and will be revealed within the next couple of weeks, then others wanted to go to Westminster Abbey, Abbey Road, and other places like that. I ended up going back to the Hotel and working on some school work with Amy across the street at the best park ever. 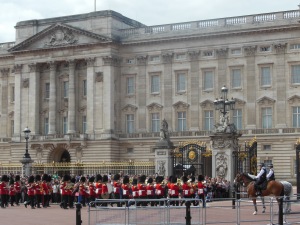 We ended our trip with a group dinner at a Turkish restaurant and a walk through the park.